The winners of the NeoCon 2013 Showroom & Booth Design Competition will be featured in an upcoming issue of Contract magazine as well as on the IIDA website.

The Annual Meeting also included the introduction of three IIDA Members who were recently inducted to its College of Fellows. Barbara Dellinger, FIIDA, MA, EDAC, AAHID, CID; Judy Pesek, FIIDA, LEED AP; and Jim Williamson, FIIDA, LEED AP. Admission to the College of Fellows is the highest honor paid by IIDA to its Professional Members, recognizing those whose work has benefitted and enhanced IIDA, and whose design works have influenced and enhanced the profession.

John Czarnecki, Hon. IIDA, editor-in-chief of Contract magazine, was awarded Honorary IIDA Membership for his many editorial and other expert contributions to Interior Design. Since assuming the role as editor in chief of Contract in 2011, John has seen the publication through a significant redesign and re-launch, while also leading the publication’s online presence and its awards programs, including the Interiors Awards, Healthcare Environment Awards and the Best of NeoCon Awards. He currently also serves as Chair of the American Institute of Architects’ (AIA) Convention Advisory Committee for the 2014 AIA National Convention to be held in Chicago.

The 2013 Star Award, bestowed on Smithsonian’s Cooper-Hewitt, National Design Museum, was accepted at the Annual Meeting by the museum’s director, Caroline Baumann, for the venerable institution’s commitment and contributions to Design since its founding in 1897. Cooper-Hewitt has consistently sought to advance the public’s understanding of Design through its permanent collection of more than 250,000 design objects, its world-class library, its exhibitions and educational programs.

Suzanne Tick, Affiliate IIDA, accepted the 2013 IIDA Titan Award. Tick specializes in developing material for commercial and residential interiors, maintains two design positions with manufacturers Teknion and Tandus Flooring, and has established a reputation for her intelligent and enthusiastic approach to design in emerging markets, as well as for her commitment to providing innovative solutions. A highly skilled and accomplished artist with a passion for textiles and repurposed materials, Tick has earned showings in New York’s Museum of Modern Art (MoMA), where her stainless steel woven sculptures were exhibited in 1998, and even a commission from the Gates Foundation for her 2011 piece “Refuse DC,” made up of 4,800 metal clothing hangers. Her numerous awards and honors include the 2008 Best of NeoCon Gold Award for Skyline’s A Collection in White, as well as the 2010 Best of NeoCon Silver Award for Suzanne Tick Markerglass.

Hilary Luckenbaugh Honored As Member of the Year 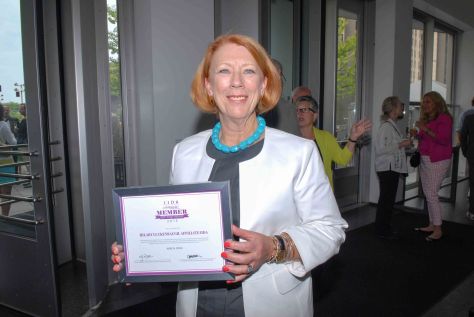 Among the many highlights of the IIDA Annual Meeting was the celebration of Hilary Luckenbaugh, Affiliate IIDA, of the Southern California Chapter, as IIDA Member of the Year. Hilary was recognized as a “driving force” responsible for the Southern California Chapter Sponsorship program that has led to the Chapter’s ability to bestow nearly $25,000 in student awards annually, as well as its overall prosperity.