The 2016 IIDA Leaders Breakfast series kicked off with a record number of attendees filling over 1,000 seats at the first two breakfasts in Atlanta and New York City. The inspirational events featured engaging keynote speakers and local honorees who offered the audience powerful messages in both cities. Here are a few of our favorites:

Jake Barton, Principal and Founder of Local Projects, a media and physical design firm that creates groundbreaking experiences, gave a moving speech to an audience of 700 Leaders Breakfast attendees. Barton shared with the New York audience his most recent and recognizable project, the 9/11 Museum in New York City. The audience had the opportunity to hear about his creative journey from the museum’s initial concepts, to the strenuous approval periods, to the final product. Barton’s visuals showed installations as well as how all of his designs aim to make the observer an active participant in the exhibit. Other projects Barton featured during his presentation included the Cooper-Hewitt Smithsonian Design Museum and the Cleveland Museum of Art.

For over 30 years, Deirdre O’Sullivan, IIDA, LEED AP, President of Idea | Span, has been recognized by her peers as a leader in the interior design industry in Georgia. She accepted her award graciously, thanking the audience, which included her clients and teammates, for all they do as designers and industry members. “IIDA has such a huge influence in our community,” she said as she shared with the audience the importance of IIDA within the Atlanta design community. O’Sullivan has partnered with some of the most recognized global organizations such as General Motors, Coca-Cola Enterprises, Home Depot, Porsche Cars of North America, and Citicorp.

After watching a touching video tribute composed by his colleagues, Julio Braga, FIIDA, LEED AP, accepted the IIDA Leadership Award of Excellence with a heartfelt thank you. Video participants, including David Bourke, Executive Director/Managing Principal of IA Interior Architects, Cheryl S. Durst, Hon. FIIDA, LEED AP, Executive Vice President and CEO of IIDA, and Ginger Gilden, IIDA, President-elect of the IIDA New York Chapter, shared their humorous experiences with Braga, from traveling to working with him. “The good news is, he’s only really getting started in his career,” said Bourke.

Leaders Breakfast offers designers an opportunity to connect locally while gaining knowledge on global ideas. Each of the breakfasts begin with an hour of networking before the event begins, allowing clients, designers, reps, and other community members to interact with one another. At Leaders Breakfast Atlanta, Durst during her introduction to the keynote Celeste Headlee, encouraged the audience to start conversations about who they are and what they do as commercial interior designers to better represent the industry and educate the general public about the profession. 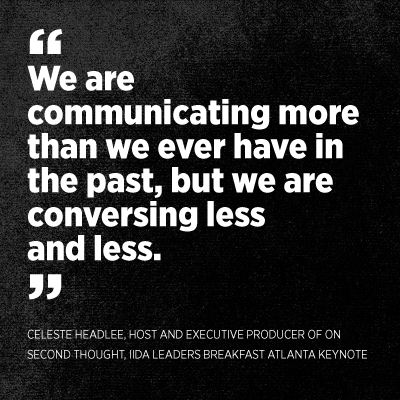 NPR personality and Atlanta resident Celeste Headlee, host and executive producer of On Second Thought on Georgia Public Broadcast, spoke to the Atlanta crowd about how communication has suffered due to technology. “People listen to reply, but not to understand,” she said. Headlee provided the audience with 10 useful rules for having better conversations from her insightful TED Talk.

The IIDA Leaders Breakfast is an annual international event series that celebrates design’s importance in the global market place by honoring the people who are both the legacy and future of design. Each breakfast features a renowned keynote speaker to provoke and encourage new ideas, and recognizes a local honoree who has made significant contributions to the design industry. IIDA Leaders Breakfast series’ international benefactors are Herman Miller and Interior Design magazine.

Upcoming Leaders Breakfasts will be held in Dallas, Houston, Los Angeles, San Francisco, Chicago, and Toronto. For more information about purchasing tickets in a city near you, visit the Leaders Breakfast page on the IIDA website.