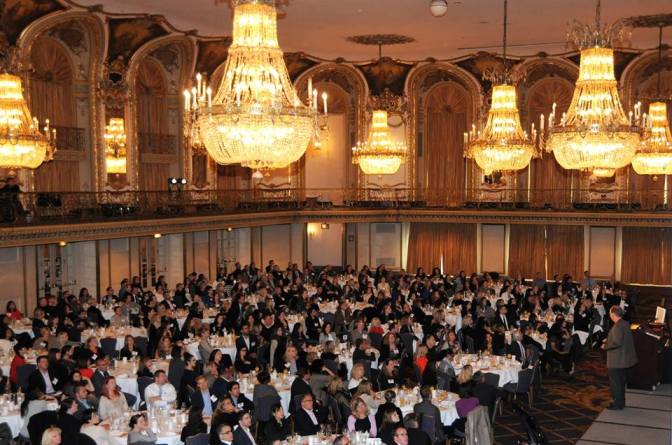 “Know more, do more, and be more before 9 a.m.,” said Cheryl Durst, Hon. FIIDA, LEED AP, to the audience attending Leaders Breakfast San Francisco, one of this year’s six fall breakfasts. “The essence of Leaders Breakfast is about leadership and honoring leadership within and outside of our community.”

The IIDA Leaders Breakfast is an international event series that celebrates design’s importance in the global marketplace by honoring local contributors to the design community and hosting a renowned keynote speaker. The eight-city series has come to a close for 2015. More than 3,300 people attended this year, the largest number of attendees in the history of the 26-year-old event.

Here are a few of our favorite memorable moments from fall 2015: 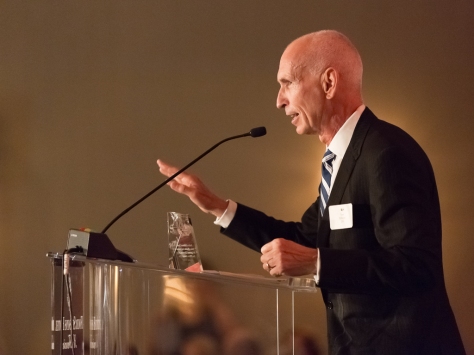 San Francisco – The 15th annual Leaders Breakfast San Francisco began with a packed house of 500 attendees on their feet when the Northern California Chapter recognized Tom DiRezno, Ind. IIDA, with its signature Distinguished Achievement Award. DiRenzo spoke to the audience passionately and humbly, encouraging them to get involved with IIDA and work together to continue to grow the community. “The voice of IIDA is only as strong as the members of IIDA,” said DiRenzo, who also urged the audience to not underestimate the scale of work they provide. “Design is not a commodity sold to the lowest bidder. Do not undervalue [the Interior Design profession].” 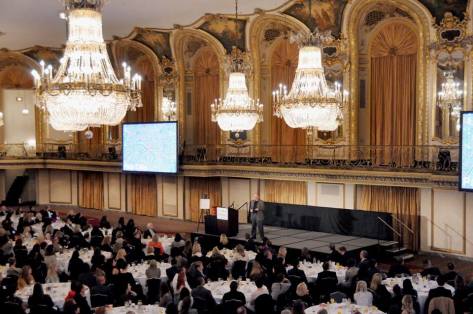 (Photo by Linda Dove) Kent Larson on stage in front of attendees at Leaders Breakfast Chicago at the Hilton Chicago.

Chicago – Keynote speaker Kent Larson, Director of Changing Places at the MIT Media Laboratory and MIT Living Labs, surprised the Chicago audience with his scientific discoveries of the evolution and future of city landscapes, including how we can reinvent interiors of apartments to save space and money. Larson showed the CityHome, an affordable and “ultra-efficient” 200 sq. ft. apartment aimed toward a younger demographic. The “responsive urban home” features internal motors to eject each piece of the room, giving the user the ability to extend or compress a room. Larson’s other items included sharable cars that fold into themselves and smart offices that ensure workplace well-being. 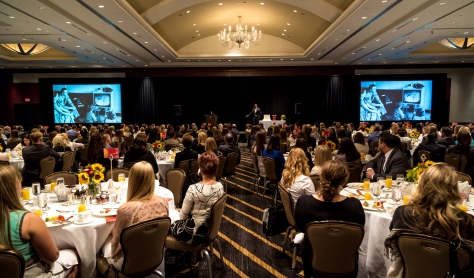 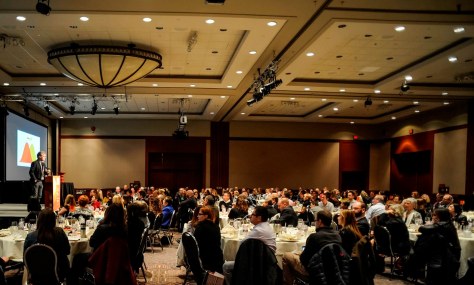 Calgary, AB – The inaugural Leaders Breakfast Calgary sold over 200 seats in its first series event in Alberta, Canada. Attendees enjoyed an inspirational morning honoring Adele Bonetti, FIDA, IDC, AAA, for her more than 40 years of volunteer service and commitment to the Interior Design profession, and listening to keynote speaker Chris Fields, Senior Brand Strategist at Twist Marketing. Fields touched on rising above the average and finding why we should be different and stand out. The audience’s minds never stopped moving as Fields shared ideas about how to live your life thinking differently.

5. A Long Line for an Autograph 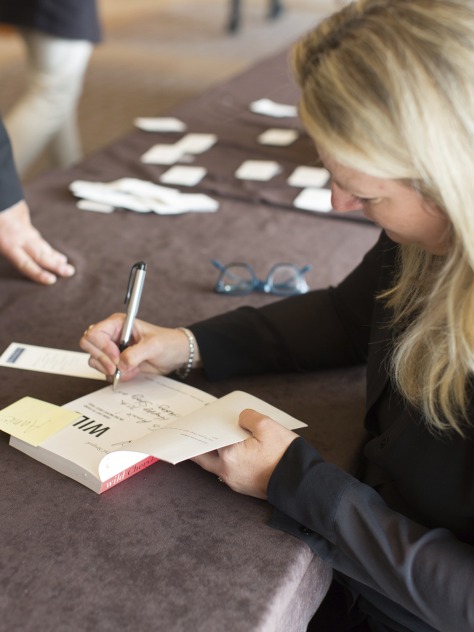 San Francisco – A long line formed after the San Francisco Leaders Breakfast for attendees to get their hands on an autograph from Cheryl Strayed, author of the novel Wild and featured keynote speaker. Strayed spoke about her enduring journey on the Pacific Crest Trail (PCT) as told in the book and discussed the difficulty she had writing the novel. “We all live lives worthy of literature,” she said. The timing of the breakfast was the day after her 20th anniversary of hiking the PCT. 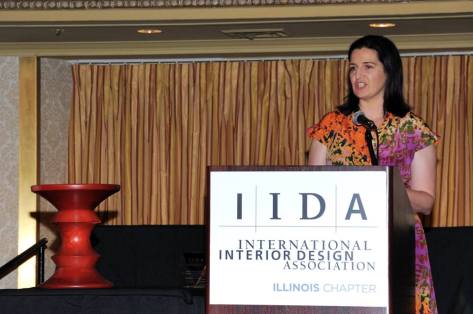 Chicago – The day before the city of Chicago captured the global design community’s focus with the first architectural biennial in North America, the largest international survey of contemporary architecture, Leaders Breakfast Chicago honored one of the biggest names within the celebration, The Graham Foundation for Advanced Studies in the Fine Arts. The foundation makes project-based grants to individuals and organizations and produces public programs to foster the development and exchange of ideas about architecture. In a twist of fate, the keynote speaker Kent Larson received two grants from The Graham Foundation.

7. The Story of the Fogo Island Inn 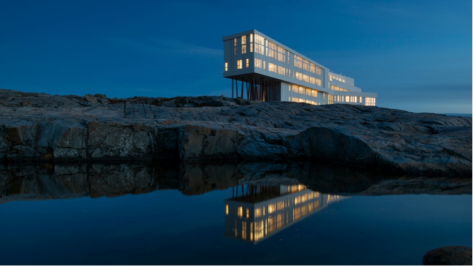 Toronto, ON – Audiences stood to their feet after the speech given by keynote Zita Cobb, President and CEO of Shorefast Foundation, and founder and innkeeper of the Fogo Island Inn. Cobb’s story started with her childhood on Fogo Island, Newfoundland, through developing the Shorefast Foundation with her brother (who also attended). Her incredible speech was accompanied by breathtaking photos of the island. She spoke about investing in culturally rich, community-owned economic assets, including the world-class Fogo Island Inn, Fogo Island Arts, and Fogo Island Shop, which sells furniture and textiles hand-crafted on Fogo Island. Cobb told audiences, “Everyone who creates something has civic duty to contribute beauty.” 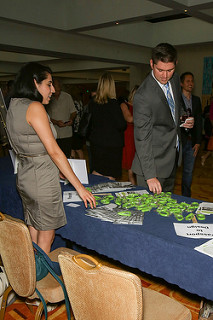 Los Angeles – “This is the year of advocacy,” announced Robyn Taylor, IIDA, President of the IIDA Southern California Chapter. This statement rang true throughout the series as other chapters honored those who advocate for the profession. Southern California hosted an advocacy table during the coffee reception to further engage attendees with legislative and advocacy issues, such as stamping documents to obtain building permits from local jurisdictions and working with local coalitions. The Northern California Chapter honored two advocates, Arlene Blum and Judy Levin, for their ongoing commitment to passing laws to eliminate flame retardant chemicals in furniture. Watch Blum’s video that played during the breakfast to learn more about the cancer-causing chemicals and her fight to end their use. 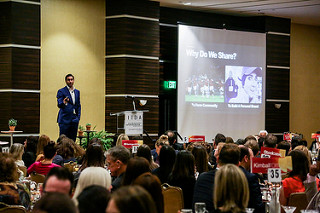 Houston + Los Angeles – Keynote speaker Jonathan Perelman, former Buzzfeed VP of Motion Pictures, gave audiences a chance to see how online content is forming conversations in our lives and that it is no longer just for consumption. Perelman taught attendees in Houston and Los Angeles why we share content online and how our daily lives are affected by social media. “Content is king, but distribution is queen, and she wears the pants,” Perelman reminded the audience. He discussed how to share your message and build a personal brand more effectively online, and engaged the crowd with entertaining BuzzFeed videos, “If it doesn’t spread, it’s dead.”

10. The Voice of Design in Toronto

Toronto, ON – “Design is the bridge between culture and commerce,” said Shauna Levy, President of Design Exchange (DX), Canada’s only museum dedicated exclusively to the pursuit of design excellence and the preservation of design heritage, in her Leadership Award of Excellence acceptance speech. In the Canadian design industry, Levy is regarded as a visionary leader, most known for her dedication to positioning the city of Toronto as an international design destination. “I saw that interior design was being overlooked and undervalued in the community, and I wanted to change that,” said Levy, who rallied the audience to pay attention to upcoming changes in Toronto’s political agenda and stand up for design as interior designers are “occupying an increasingly important role” in the world.

How do a biophysical chemist and a steadfast environmentalist find their way to accepting one of the top honors in the commercial interior design industry? The two honorees of the Leadership Award of Excellence at this year’s IIDA Leaders Breakfast San Francisco are renowned in this industry, but not how the general audience is involved. Their journeys are separated by their personal feats and intertwined by their commitment to advocating for reducing the use of harmful flame retardant chemicals in the products and furniture of which the industry’s designers and representatives create, sell, and use in their everyday lives.

Arlene Blum, Ph. D., executive director of the Green Science Policy Institute, and Judy Levin, director of the Center for Environmental Health’s (CEH) Pollution Prevention, joined efforts in 2012 to revise the outdated standard which allowed the use of harmful flame retardant chemicals in furniture and baby product foam across the U.S. and Canada. The same toxic chemical Blum successfully helped remove from children’s pajamas in 1978 had continued to be used in furniture. Advocating for the supply and demand of healthier furniture, Blum continued her efforts on working with and educating furniture and foam manufacturers, which she initially started in 2006. Meanwhile, Levin took the other side of the message and began educating the designers and purchasers.  Levin has successfully enlisted an impressive list of purchasing companies such as Facebook, Kaiser Permanente, HDR Architecture, and Perkins+Will to express their desire to buy retardant-free furniture using the “Purchasers Pledge.”

With the support of California’s governor, Jerry Brown, and a California-based flame retardant coalition, co-led by Levin and the CEH, the California furniture flammability standard was finally changed so that flame retardants are no longer needed in furniture and baby products. Along with furniture, these requirements have also led to ability of manufacturers to meet the new standards without the use of toxic flame retardants in mattress pads and children’s products such as changing pads and strollers. In 2010, the Green Science Policy Institute’s work helped prevent a new standard that would have led to flame retardants in pillows mattress pads and comforters – another huge victory for the public’s health, environment, as well as fire safety. The new furniture flammability standard in California has become a de facto national standard.

Most recently, Blum and Levin collaborated to prevent new and potentially harmful furniture flammability standards which are under consideration by the Consumer Product Safety Commission. In 2014, CEH co-sponsored a bill that now requires manufacturers who sell furniture in California to label their products for the presence or absence of flame retardant chemicals. A bill to require the labeling of flame retardants in children’s products is in progress and will be voted on by this September. The Green Science Policy Institute continues to educate purchasers, designers, retailers, and manufacturers to reduce the use of whole classes of harmful chemicals.

Learn more about IIDA Leaders Breakfast and purchase your tickets!