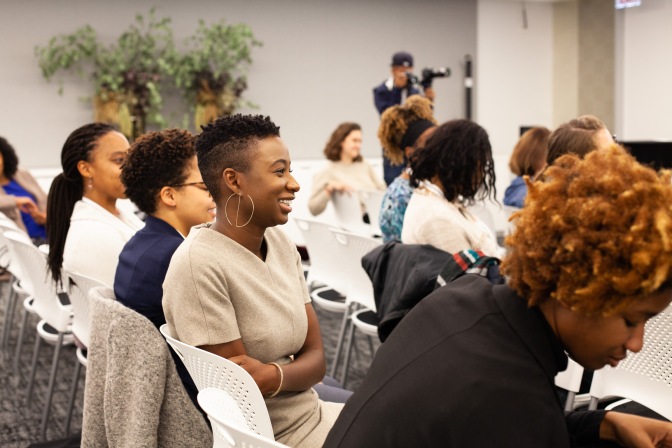 It is 2018 and only 36 percent of newly licensed architects in the U.S. are women and only two percent are Black. But those numbers are changing. With the benefits and necessities of diversity in the workplace undeniable, firms big and small are setting new goals for themselves and having active, sometimes uncomfortable, conversations about diversifying the field.

But what does “workplace diversity” really mean when the leaders of these discussions are often not the ones who directly face discrimination? The 46th Annual NOMA Conference attempted to pose, answer, and challenge the questions around diversity from the personal perspectives of people of color. Through a series of events, lectures, and panels, “NOMA UNBOUNDED – The Convergence of a Legacy” was a weekend devoted to celebrating and defining diversity within the architecture and design fields.

The event positioned itself as less a formal discussion and more an intimate exchange among four people on racism, equity, culture, and loving their jobs. “We’re not going to have images, you’re not going to look at a PowerPoint,” Durst announced to the audience members. “We’re just going to have a conversation. The power of conversation is underrated and we need it now more than ever.”

Bandy began the discussion with how he perceived a growing importance of sustainability and well-being going hand-in-hand with a push for diversity within design, architecture, and manufacturing. Communities of color often bare the brunt of unsustainable, cost-cutting development practices, and now the conversations around helping those communities are being led by a diverse crowd. “There has been an influx of people being able to express themselves more freely as it relates to the importance of design,” Bandy said.

Bullock echoed the notion that diversifying the workplace is critical for bettering the lives of diverse communities. “I wanted to become an architect because I wanted to improve how people live,” she said.

Architects are thinking about the environment on a personal, micro level, and in turn, discovering how important a diverse workplace is for generating and maintaining sustainable practices. It seems that the A&D industry is actively rediscovering the workplace as a microcosm for society, and as Durst noted, “You can’t design for the world if you are not of the world.”

“I’ve had clients that have given us work because we are diverse,” expressed Bullock, “and that’s been happening more and more.” Many Perkins+Will projects focus on communities; this necessitates diversifying those working on community projects and helping improve the quality of life for a broad range of people. Diversity is a “spoken strategy” in the Perkins+Will offices.

The panelists also described the ways in which their firms are taking the initiative to ensure diverse hires, which range from overhauling the hiring process to having ongoing dialogues about racism and inclusion.

“Because…Design” concluded with the question “Does architecture still excite you?” (an unequivocal ‘yes’), along with advice from the panelists: “Bring the voice of your culture and your ancestors to work with you every day, ” Bandy stressed. “Don’t leave your street sense at home; bring it to work with you. Bring your true self to the table.”

Visit NOMA Unbounded for more information about the conference.