Change is, many times, a good thing. I’m thrilled to begin my work as Deputy Director and Senior Vice President of the International Interior Design Association (IIDA). After 18 years in editorial positions in New York related to the architecture and design profession, I am a few weeks into the work at the IIDA headquarters in Chicago—getting to know the headquarters staff and getting up to speed on every aspect of IIDA’s programming, events, communication efforts, and advocacy initiatives. I am focusing my work on a few key areas prior to NeoCon, with a broadening scope to follow as the months proceed. Working closely with IIDA EVP/CEO Cheryl Durst, Hon. FIIDA, the headquarters staff, and IIDA chapter leaders, my initial focus is on industry relations, membership communications, and expanded programming efforts for the organization. And I am ramping up my work just as we prepare for spring events and NeoCon!

Members should know: In the near term, besides the forthcoming announcements of award winners, you’re going to see a few exciting new things from IIDA in the coming weeks and months. Some are subtle, and some are more bold. How’s that for a tease? Saying nothing and yet leaving you curious for more: That’s where my years of editorial experience come in to play.

Deadlines to Keep in Mind

Are you already planning your time for NeoCon week in Chicago? Be sure to include the IIDA Annual Meeting, COOL Gala, and IIDA headquarters reception in your plans.

The IIDA Annual Meeting is at 1 p.m. on Sunday, June 10, at the Museum of Contemporary Art. Admission is free and open to all in the industry. But we will reach capacity, so get there early to get a seat to see honorees such as the Star Award and Titan Award winners, and Chapter of the Year and Member of the Year. Gabrielle Bullock, IIDA, FAIA, NOMA, Principal at Perkins+Will Los Angeles, will give her inaugural address as the 2018-2019 International President of IIDA.

Tickets are available for the IIDA COOL Gala to be held on the evening of Sunday, June 10, at The Ritz-Carlton, Chicago, which was beautifully renovated this past year. Reserve your tickets at this link for COOL.

On the opening day of NeoCon, after you’ve had a full day within the friendly confines of theMART, join the IIDA team for a reception at our IIDA headquarters office. The reception is from 3 to 6 p.m. on Monday June 11, at 111 East Wacker Drive, Suite 222.

Reports with Insights from Practitioners and Students

And in case you may have missed it: You will find the results of the IIDA Interior Design Compensation Report to be informative. Released just two months ago, the report is an analysis of salary and benefit information that enables design leaders to monitor the health of the industry. According to the report, design professionals’ salaries are on the rise: 69 percent of respondents report receiving a raise in 2017. And, according to the U.S. Bureau of Labor Statistics, the profession will grow an additional five percent over the next decade. Learn more about the report—and the IIDA compensation calculator—at this link.

That’s all I have for now. Please visit me and the IIDA team in Chicago (in our fantastic office designed by Todd Heiser, IIDA, and his team at Gensler). And you’ll see me on the road, too, at HD Expo in Las Vegas in early May and at the AIA Conference on Architecture in late June in New York. Contact me at jczarnecki@iida.org, and I look forward to seeing you all soon! 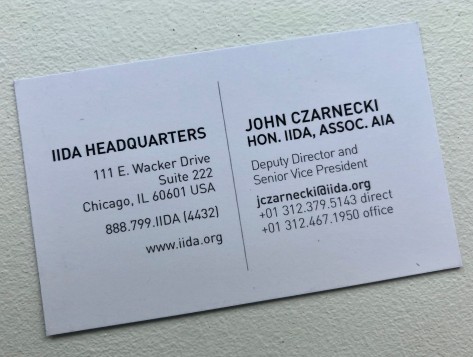